I’ve been into cutting-edge technology my whole life, and I have always been interested in bringing the skills and technology I’ve learned in the private sector to help nonprofit organizations with worthwhile causes.

I began volunteering while I was in high school, going door to door talking about environmental issues and raising money for a toxic Superfund cleanup effort in Ohio. In college, I organized informal classes with a campus service organization to help other students learn how to use the Internet, build websites, and use Microsoft Word and Excel to their full effectiveness.

After college I moved to Seattle where I had gotten a job working at Microsoft. While I established my career during the day, on nights and weekends I continued volunteering.  Soon after starting at Microsoft, I came across a new nonprofit called The Mars Society, which is now the world’s largest space advocacy nonprofit organization dedicated to settling Mars.  Members of the Mars Society include Elon Musk, Buzz Aldrin, and many experts in the fields of science, technology and human factors research as they apply to exploring and someday settling the Red Planet.  I was immediately intrigued and joined the organization as a founding member in their first year.

At the 1999 annual convention, I presented on how the organization could create a world-class web presence to advance its goals and support its technical projects.  The organization was working to establish two analog research bases to practice living and working on Mars, one in extreme northern Canada and one in the deserts of Utah.  In the two decades that followed, I continued volunteering to help the organization to build and grow its web presence and the use of modern technologies in all aspects of its projects and operations.

In recent years, I set up a hybrid cloud using Microsoft Azure, WordPress, and other technologies to host our websites and store & process data for our projects.  I supported others across the organization to implement modern cloud-based SaaS offerings to support the functions and processes of the organization.  I digitized and modernized our membership database, allowing the organization to grow its paid annual membership (a key fundraising source) from several hundred members to over ten thousand.  I established volunteer recruitment and onboarding processes to bring on and train hundreds of volunteers to assist with our technical projects and annual events.

Today, the Mars Society’s web and social media presences routinely reach tens of thousands of people across the globe, and we provide news, information, and commentary about how current events and developments enhance the possibilities of sending humans to Mars and further exploring the planet robotically.  We have expanded our digital footprint across all social media and sites like Reddit where we can reach space enthusiasts of all ages directly and very effectively.

My efforts resulted in my being awarded an Outstanding Volunteer award from the Society and being publicly recognized for my work in expanding and modernizing the organization’s web presence.  In 2011, I was made a senior officer and given the title of Director of Information Technology.

In 2017, I began an effort to integrate virtual reality technologies with our physical Mars Desert Research Station in Utah.  By successfully conducting a Kickstarter fundraising effort which raised over thirty thousand dollars, we were able to scan and translate the physical terrain in Utah and our Mars analog facilities into a virtual reality application that is used for crew training and public outreach.  In 2018, after winning my third Outstanding Volunteer award for my work on the VR project and our online encyclopedia Marspedia.org, I was added to the prestigious Steering Committee.

In 2020, I organized our first online virtual convention, which was wildly successful by having ten thousand registered attendees, a record for our annual event.  We were able to get many prominent speakers such as Elon Musk and the NASA Administrator Jim Bridenstine to virtually attend the event. This also included current and former NASA scientists, researchers and others from academia and the private sector.  We conducted the event using the most modern virtual meeting technologies and high-quality virtual experiences that allowed attendees to meet, network and communicate as if they were at an in-person event.  We repeated the event in 2021 and had a full-size Virtual Reality room where attendees could network and participate in the sessions by asking questions of the speakers from the VR room that was a video attendee on the Zoom call. It was very slick and cutting-edge!

In December 2021, I began work as the full-time Executive Director of the Mars Society. In my new role, I am conducting strategic planning and a systematic approach to fundraising that will enable new programs and capabilities for the organization. We hope to conduct a new set of expeditions to our Flashline Mars Arctic Research Station on Devon Island, Canada, and begin new educational and research programs.

I will be commanding a crew at the Mars Desert Research Station in April 2023 with a multi-national crew of researchers. We plan to conduct several experiments including biological, medical, psychological and other human factors, and also to instrument and collect data from ourselves and from the whole MDRS campus.

Someday, in the near future, I believe the first human being will set foot on Mars.  When that moment happens, I imagine I will feel a personal sense of accomplishment having brought that moment into being through my over twenty years of volunteering.  I know that my efforts have resulted in the organization’s ability to dramatically amplify its advocacy of the exploration of the red planet. 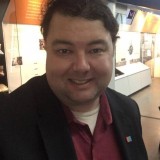 James is the Executive Director of The Mars Society and a former Microsoft manager. He lives in Sammamish, WA (a suburb of Seattle) with his wife and two daughters.